Whether you’re rostered on for staff morning tea, building a veritable Taj Mahal for a wedding or birthday, or just simply want to sit down with a pot of tea and delectable morsel on a lazy Sunday afternoon, these cupcakes are the perfect choice – every time. They require few ingredients – most of which are usually on hand in your pantry and fridge – and the batter is prepared in a few minutes that it’s not even worth bringing out the stand mixer, unless of course you are making double or triple batches.

I can’t take credit for this recipe. It’s been floating around on the internet for such a long time (known as ‘Scout’s Cupcakes’) that it is impossible to find the original post. Internet commentary suggests that it was initially posted to Taste.com by a contributor with the handle name Scout, hence the name of the recipe. The genius behind these cupcakes is that it negates the need for starting off by creaming butter and sugar which can take some time in the stand mixer and even longer if braving whisking your mixture by hand. Instead, this recipe begins with store-bought cream to which eggs, vanilla, flour and sugar are added.

While this is a recipe for a simple vanilla cupcake, you can use the same recipe to make chocolate cupcakes simply by replacing two tablespoons of flour with cocoa powder. You can add what you want to flavour these – a little lemon or orange zest to the batter complemented by a citrus royal icing is good. Where you will add the most interest and flavour is in your topping. I tend to lean toward buttercream that is light and whipped and can be piped on as simply or as decadently as you have patience for. Furthermore, these cupcakes stay moist for a couple of days in an airtight container, and freeze well for a couple of months.

I made 120 of these cupcakes for a friend’s wedding earlier this year. I made 60 vanilla and 60 chocolate cupcakes and used the same batter recipe to bake the sponge layers for the feature semi-naked cake baked in round 8″ tins (they just bake a little longer than the cupcakes do).

I baked the cakes the day before the wedding and created the buttercream roses to top the cakes over a couple of weeks by piping two-toned buttercream onto squares of baking paper on an icing nail, snap freezing them on a tray, and then simply pasting them, frozen, to the top of each cake with a little extra icing. This is a brilliant trick if you have lots of cakes to make and want to get creative with buttercream flowers and decorations. Buttercream freezes perfectly and you get the freedom of being able to play around with placement as you decorate and you avoid the danger of making and correcting icing disasters that you would if you were piping straight onto the cake. The buttercream flowers defrost on the cake and remain creamy and hold their shape. 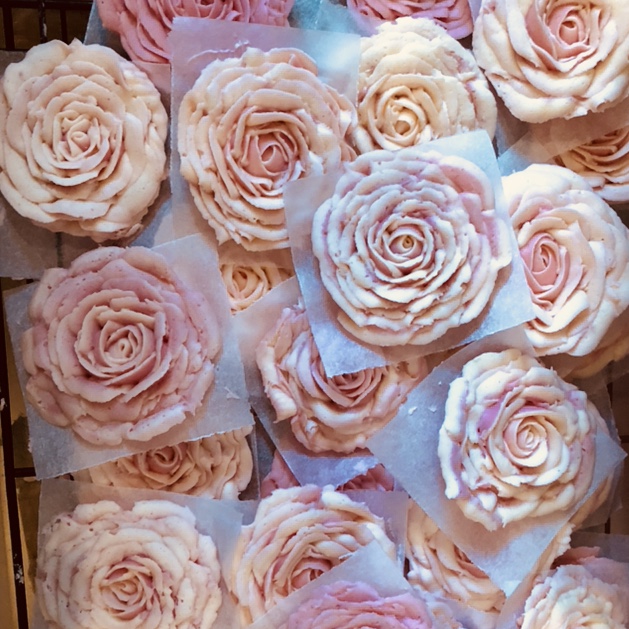 I used Not Quite Nigella’s Best Ever Buttercream Icing recipe and Wilton colour pastes to make these roses. A paste or powder colour is better than those liquid colours you can buy as the colours tend to hold better and not run, especially when you are freezing pre-made decorations. 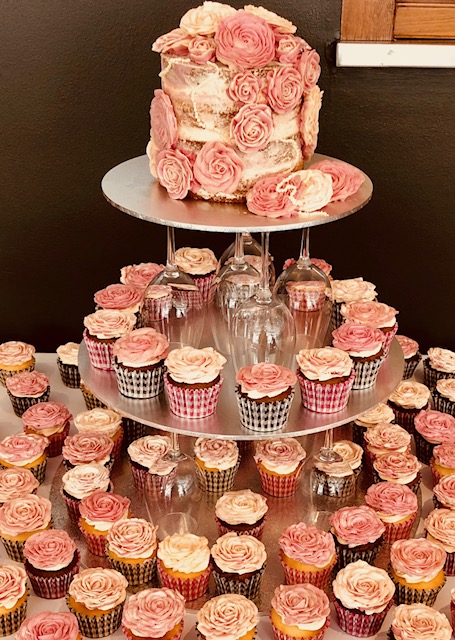 Crack eggs into a 1 cup measuring cup or jug.

Add cream to the eggs until you reach the top.

Place the cream and eggs to a mixing bowl and beat for about a minute until well combined.

Add vanilla and sugar and beat for about 3 minutes or until the mixture turns pale and fluffy.

Fold in the sifted flour.*

Line a 12 hole cupcake pan with liners and spoon tablespoons of the batter into cupcake liners. A good guide is to fill them 3/4 to the top to allow room for rising without spilling out over the papers.

Bake for 12 – 15 minutes or until a skewer or toothpick inserted into the centre of the cakes come out clean.

Cool on a wire rack before decorating.