The idea for this recipe really started in the 15th Century, when Greece was part of the Ottoman Empire. A band of highwaymen turned self-appointed resistance fighters, descendants of the Greeks who took refuge in the country regions to resist and oppose the looming Ottoman rule, became known as the Klephts.  These men were often bandits trying to avoid taxes, debts, vendettas against them, or on the run from Ottoman officials. They survived by ransacking travellers and settlements while they hid in the mountains and dense countryside. Famously, they would steal lambs and goats and cook the meat with potatoes, or whatever they could find, in fire pits dug into the ground. The pits would be filled with hot coals, the meat and vegetables wrapped in a parcel, and the pit would be covered over with dirt so that no smoke or fire could be seen, concealing  their whereabouts from those who might be out to get them. The Greeks call meat and potatoes cooked this way ‘kleftiko’. The word kleftis in Greek means ‘thief’ and without sounding like the Dad in ‘My Big Fat Greek Wedding’ it isn’t hard to see the root of the traditional Greek word in words like kleptomaniac, a person who has the compulsion to steal.

In the spirit of the Klephts, I have remorselessly stolen the idea for my own meat and potato packets. I had the idea for making some sort of ‘food pack’ for dinner when we had a group of people over for a bonfire night. Ideally, I wanted something that we could cook in coals to christen our new fire pit; I wanted something fitting for sitting around a campfire – I wanted some sort of gourmet campfire cuisine. It also happened to be the case that majority of people at this bonfire night were Greek, so it seemed apt and brave to make something Greek inspired for dinner. I wasn’t game enough to try cooking them on the coals, so I relied on my oven which did the job perfectly.

There are so many things to love about this dish. You can prepare this well ahead of time and keep the foil parcels in the fridge to infuse the flavours taking them out an hour before you’re ready to cook to come to room temperature. You can use whatever meat and vegetables you like. The first time I made these for the bonfire night I used chuck steak, potatoes, green beans, capsicum and zucchini and they were a hit. I don’t know that I would use zucchini and capsicum again, though, as these vegetables tend to give off a lot of extra water, but cooking is all about experimentation after all. If using chicken, go for cuts like thigh which will not dry out. Also, this is rustic cooking at its best: once you prepare the parcels and pop them in the oven, it is really set and forget, whether you are making this for one, two or ten people, and presentation is really not a factor. Every person has their own parcel to open, there’s no fancy plating up, and if you eat them straight from the packet as the Klephts might have, there is minimal washing up. Above all, the foil parcels ensure that the meat cooks tenderly and the trapped steam ensures the contents are infused totally with garlicky, salty, citrusy and herby flavours that make up the spice mix.

An easy herbed yoghurt sauce, a squeeze of lemon juice, some grilled pita wedges and a quick Greek salad helps to make this a complete meal. Or try my Warm Greek Bean Salad to complement this on a cold night whether on the couch in front of the heater or around your own camp fire. 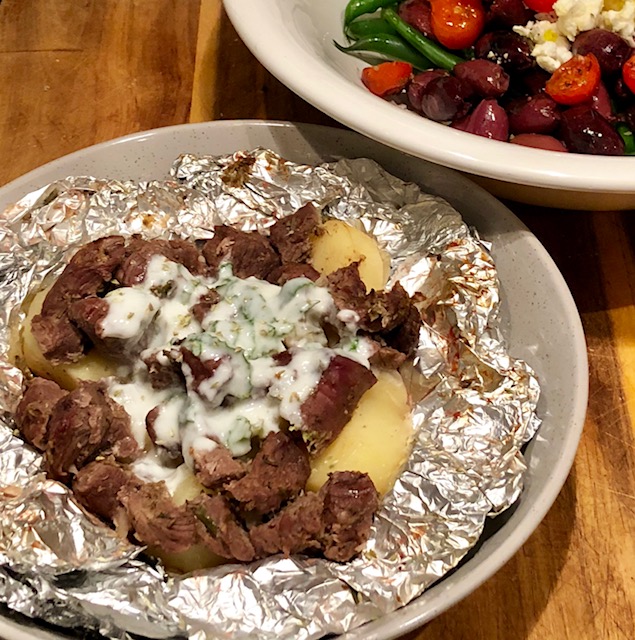 For the herbed yoghurt dressing you will need

Place meat, potatoes, garlic, nutmeg, lemon juice and zest, salt pepper, oregano and rosemary and half the butter into a large bowl. 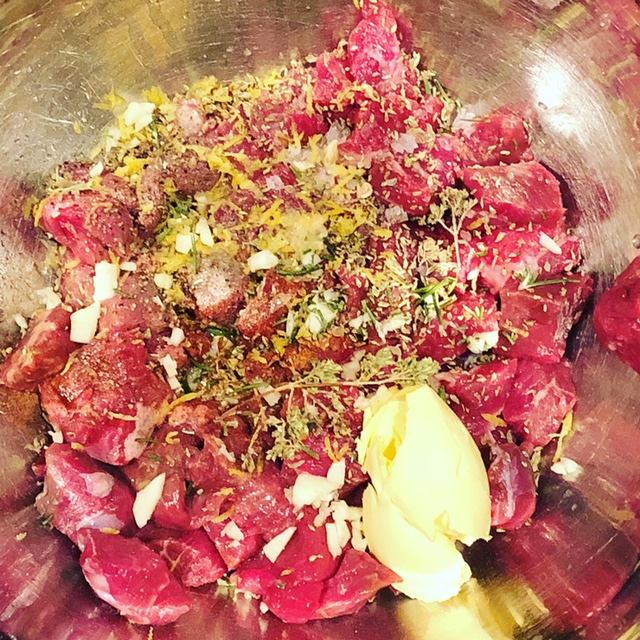 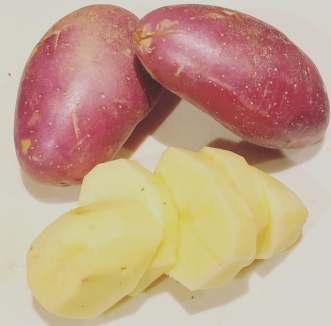 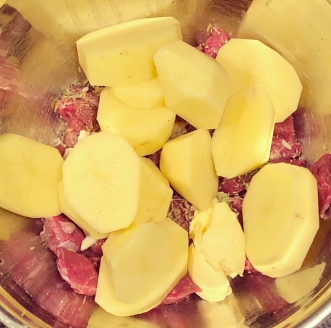 Cut 2 pieces of aluminium foil per packet, about 40cm lengths, and lay them criss-crossed one on top of the other.

Bring up the ends of the top piece of foil to begin creating your packet, totally covering the meat and potatoes. Now do the same with the bottom piece of foil. You have created your first packet!

Now create your second packet using another two piece of foil, placing potatoes on the foil first, then meat, a little extra seasoning if you wish, and the remaining butter. 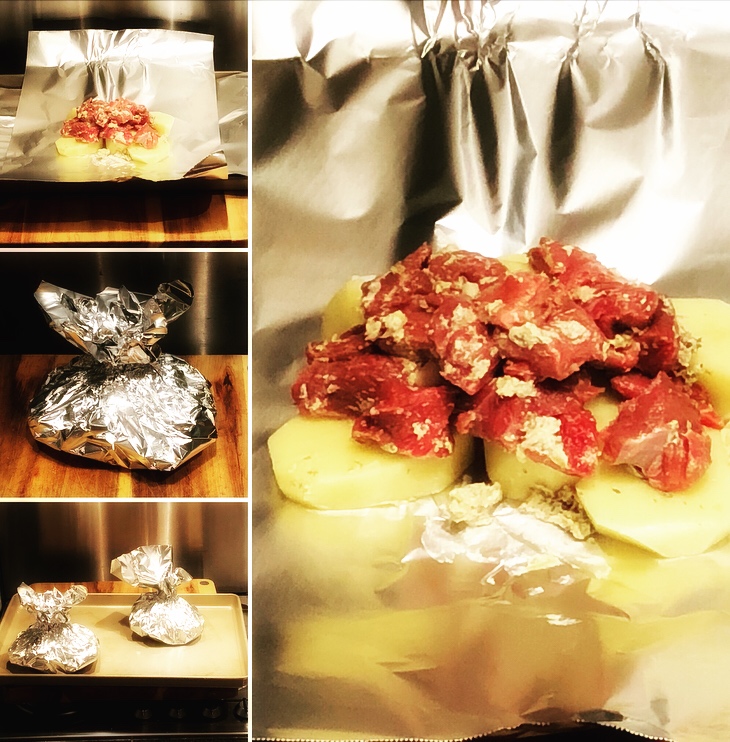 Place both parcels on a baking tray and cook in the oven for one hour.

While the parcels are cooking, add a clove of minced garlic, a good pinch of salt, a tablespoon of chopped mint, the zest and juice from the remaining half lemon to four tablespoons of natural yoghurt and mix thoroughly to combine to make your herbed yoghurt topping. 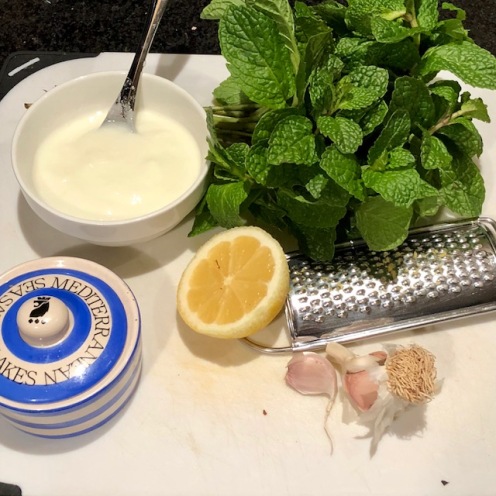 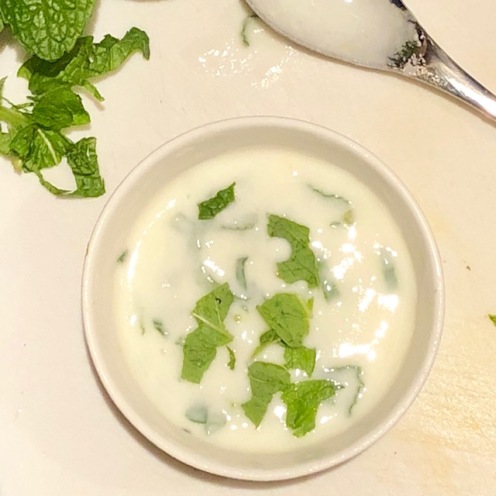 Use a tea towel or tongs to tip the parcels upside down for a few seconds before opening to give the meat and potatoes a quick coat with the melted butter, careful not to lose any of the juices from the packet.

Open the packets and top with the herbed yoghurt dressing, a lemon cheek, a sprinkling of dried oregano and some fresh chopped mint before serving. 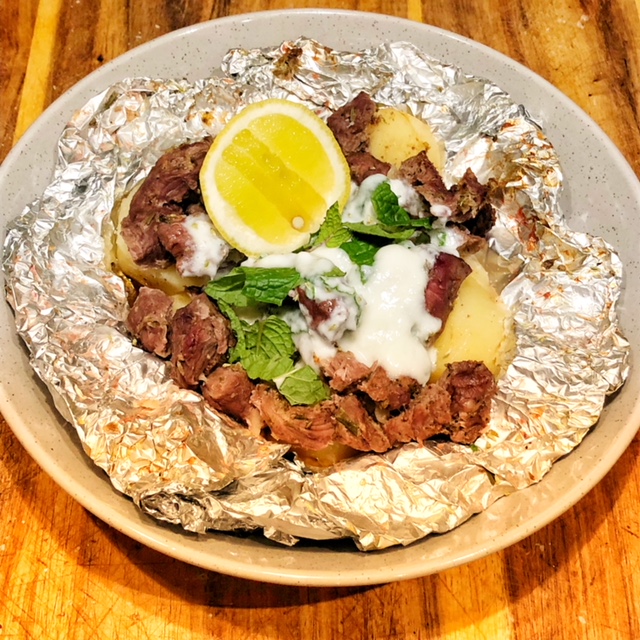